Our series of ‘Euganean Journeys’ begins with one of the most famous cycling routes. And it could not be otherwise, since this route is the emblem of our territory. Only those who explore it can claim to have discovered all the facets of our hills.  But there are many more, suitable for everyone, which we will report on in future issues of the newsletter.

The route runs right at the foot of the hills and all around: the landscape changes with every pedal stroke. The peaks tell the way: just as the sailors followed the Big Dipper, so the reference point will be the many volcanic heights in the hills. The handlebars of the bike will always tend to turn in the same direction to circumnavigate this unique territory.

Before riding through the Euganean Hills, we would like to remind the guests of the Hotel Tritone that it is possible to rent electric bikes (and not) directly from our reception desk, upon request to the staff.

The pick-up and delivery takes place right at the hotel and you can also download an app with several routes to choose from.  One of them is the one we are about to tell, the most comprehensive and also the most challenging. Many others, simpler and suitable for all ages, will be published later.

The itinerary that narrates the history, nature, and art of the Colli

Starting from Abano, and deciding to follow the loop clockwise, the route is made up of wonders that clamour for countless photo opportunities.

Immediately after the start, you will come across Villa Draghi, which dominates Montegrotto Terme; it is followed, in the territory of Battaglia Terme, by Catajo Castle, also known as “the Royal Palace of the Euganean Hills”: a place that we at Hotel Tritone have already suggested in this post.

The first triad of wonders concludes with Villa Emo Capodilista and its unsurpassed garden.

Pedaling southwards, we are enchanted by the two most picturesque towns on this cycle route: Monselice and Este.

The castle of Monselice sumptuously greets cyclists, from the top of a green hillock. A view that is easily immortalized and tends to remain in the hearts of those who ride this route.

The passage through Este, on the other hand, seals what is a real journey through time. What is fascinating is the contrast between the modernity we bring with us (mobile phones and electric bicycles) and the walls that run at a slow pace, interspersed with merlons and remnants of the sky. 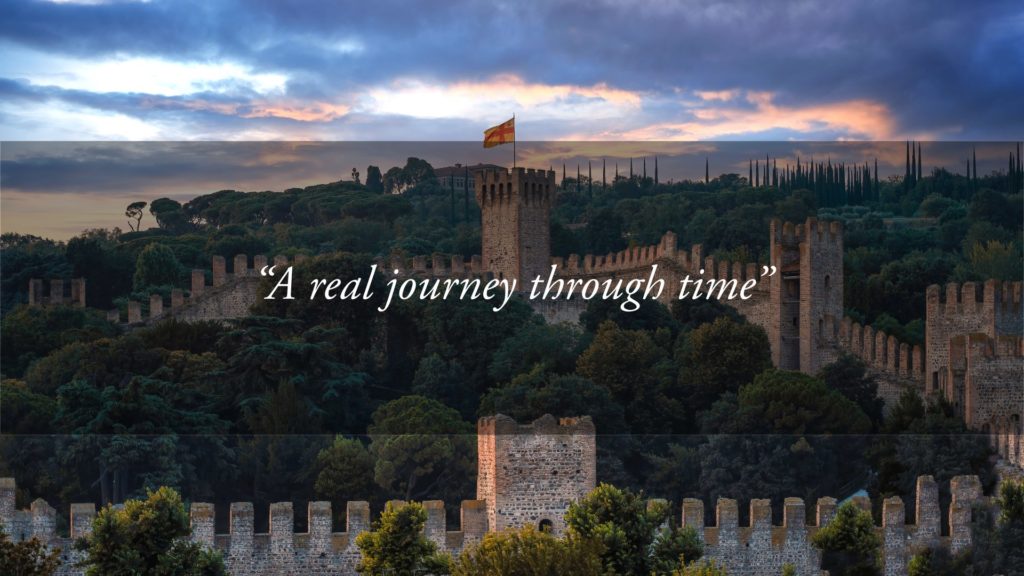 The route continues through the Paduan countryside, among canals in which clouds are reflected, endless meadows and elegant herons soaring.

It is not too long, however, before you discover another castle, that of Valbona, which once again tells of the Middle Ages in these parts.

Almost at the end of this tour, the Praglia Abbey appears before the cyclists’ eyes, another place mentioned in this blog, in the form of a travel tip, just a few minutes from the Hotel Tritone. There is an old library and a shop selling natural products created by the monks themselves.

Back in Abano, you can leave your electric bikes at the hotel and find refreshments in your room and later in the Arquà Petrarca Spa, which not surprisingly bears the name of one of the villages in these magnificent hills.

Ideal period: from March to December.

Indications: not suitable for children under 14 years of age.