Discovering the Roman baths by bike

Our area is full of precious gems set amongst the Euganean Hills and the spa towns of Abano Terme and Montegrotto Terme.

To help our guests discover these places, unknown to most people, we have activated an electric bike rental service, perfect even for those who don’t normally cycle, so that everyone can spend time outdoors in new places. Hotel Tritone guests can book their bikes at the reception desk and then collect and return them at the Hotel.

The fifth chapter in the “Viaggi Euganei” (Euganean Journeys) series takes you not far from the Hotel, on an easy route with great historical value. The destination, in fact, is the archaeological area of Terme Euganee, located in the Montegrotto Terme area.

The journey through history begins at the Hotel and immediately crosses the Parco Urbano Termale Abano, the energetic green heart of the city. Moving from green space to green space, you reach the Montirone gardens, which — contrary to appearances — don’t actually date back to Roman times. The gable of Corinthian-style columns was created in the early 20th century by Venetian architect Giuseppe Jappelli.

The welcoming sanctuary of Monteortone 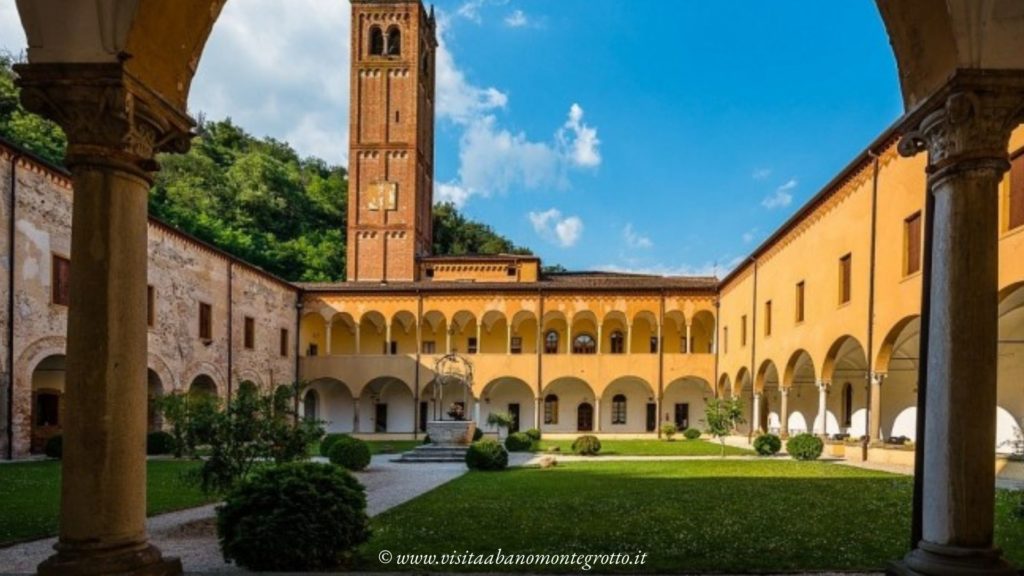 Continue out of the city centre to reach the Santuario del Monteortone along the street of the same name, and then the via del Santuario.

The Santuario della Madonna della Salute is located next to the Monteortone, and is solemnly visible as it sits higher than the road. The Baroque façade and Gothic-style bell tower invite you to enter the building to discover the large fresco by Jacopo da Montagnana that decorates the apse, which is bounded at the top by a cross vault.

The Monastero di San Daniele and its rarities

At the end of the visit, continue along the same road and turn into the via S. Daniele, whose name announces the next destination: the Monastero di San Daniele. Perched on the summit of the mountain of the same name, this place of worship is run by a small community of Benedictine nuns.

A restorative break could also be an opportunity to cross the threshold of the church, rebuilt in 1711, and to see the statues and bas-reliefs by Antonio Corradini. In the rooms of the former villa, which is part of the majestic complex, you can also see coffered ceilings, floors with geometric designs, and a Murano glass gate.

Villa Draghi: a piece of Venice in Montegrotto

The journey continues by turning slightly back onto the San Daniele road and taking the Euganean Hills ring cycle path (the first route featured in the series, which you can find here). Follow it in the direction of Montegrotto until you come to Villa Draghi. The building, which was inspired by the Doge’s Palace in Venice, was rebuilt in the mid-19th century and includes the Museo Internazionale del Vetro d’Arte e delle Terme, which displays objects of great artistic value made by the most famous Murano glassmakers. In addition, a section of the museum houses archaeological finds from the Roman era discovered in the area.

Climb up to the spectacular terrace to feast your eyes on the view, which includes the silhouettes of the hotels of Abano and Montegrotto. 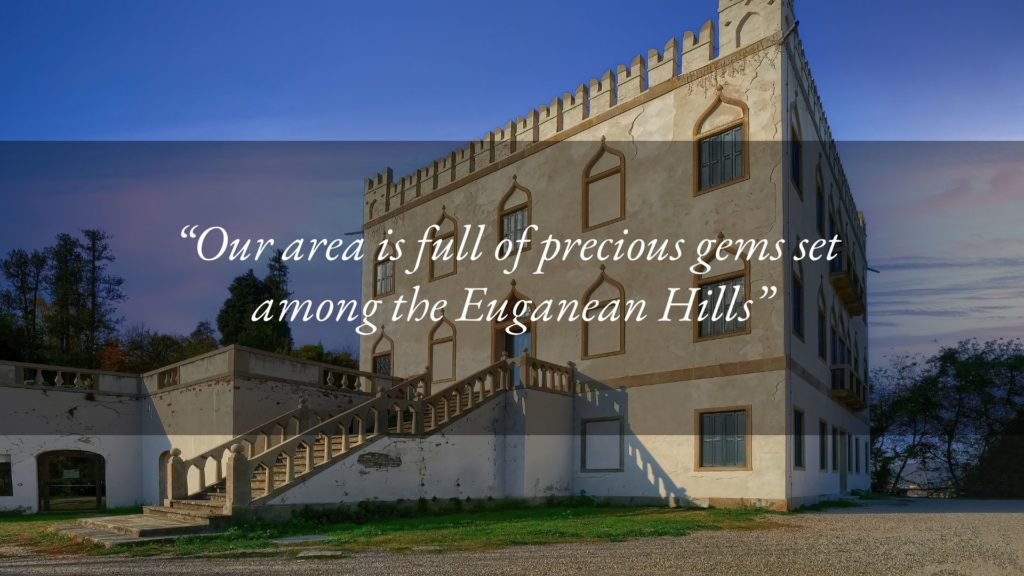 The historic remains of the ancient Roman baths

After resuming the journey by bike, we head for the final stop: the archaeological excavations of Montegrotto Terme. Leaving the cycle path and following the strada provinciale 63 (via Catajo), we reach the excavations of Via Neroniana, where the remains of a sumptuous Roman villa and an extraordinary spa complex take us back to the beginning of the first century AD. You can enjoy a large apsidal hall and the baths used for diving and swimming, equipped with a complex system for circulating the thermal waters.

Finally, going straight on and then left, you come to via degli Scavi, where three large interconnected bathing pools, changing areas, rest areas, nymphaea and a small theatre have been discovered, all dating back to the age of Emperor Augustus.

At the end of the trip you can reutrn to the Hotel Tritone by passing through Montegrotto Terme to complete the last few kilometres of this pleasant and worthwhile ride.